Please see more of my artworks for sale at my websites:  http://souvenirphotostudio.neocities.org/ or http://saccc05.tripod.com/
REMINDER: If you are interested in getting the Blogs via email, simply send me an email to aljbourassa@gmail.com and I will add you to a special list in my Blog settings that appears to work, yippeee.  I won’t do that without your permission, and THANK YOU all for your patience and support.
******
Monday May 14, 2018
OMG, my friend Cris has correctly pointed out that I have not written anything since Friday depriving him of his daily excitement of my written word...lol.  Actually, Cris is the published author whereas I am just the retired hack with a handy keyboard.
Yesterday, I had a promising visit from folks who own a restaurant in the next block looking for a house in the area for their brother/uncle.  If these kind of good people keep coming I just might sell this place...

This morning I got a bit of a surprise to be included on this list: 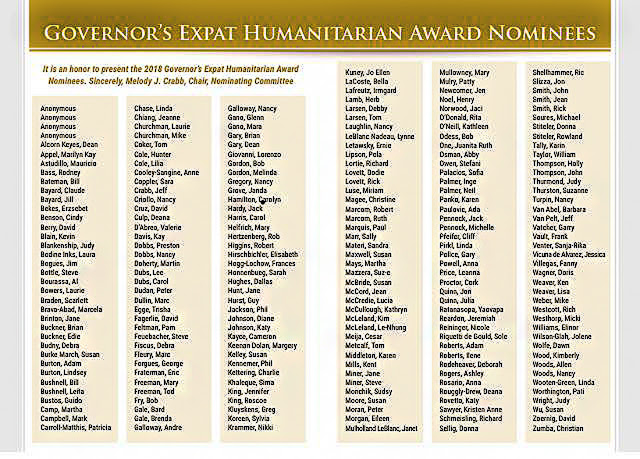 I apologize for the poor quality from this tiny document stolen off Facebook, but everyone is in alphabetical order.  I was not able to get a better copy prior to this writing.
When I first heard that I was nominated, I immediately nominated other people much more deserving than me, and informed the organizers that I did not want to be on any list, also because I am leaving Ecuador as fast as I can.  I was assured that, even though I had been nominated by more than one, my name would be removed from those for actual consideration for any exemplary award.   I had also declined to go to the banquet.
Therefore I was more than a little shocked to find this list published with my name on it.  If anything, it could have been under one of the "Anonymous" entries.  I note many good friends, including my ex, on the list and I am proud of them all.  They deserve to be on the list!  Still, it is nice to be thought of, I guess.

I got up late which meant that when I finally got out on Buzzer to go to the SRI office I ended up riding through some rain, again.  I know that I should have just taken the darn bus.
What I didn't expect was that I could no longer submit my listing of receipts in person, they are now insisting that these all be submitted online....  the bastards...!!   While it could probably be more efficient and cost-effective (if it could be done right) this is just another blatant ploy by the asshole Ecuadorian government to try to eliminate as many people as they can from claiming the tax refund...  Pardonnez mon Anglais, but I get so steamed just thinking about this BS.  This is only for people over age 65, so who does this hurt???  This hurts the elderly and the old indigenous folks with no computers or access, that's who... the very people the Constitution says the Government is supposed to protect.
And who is there to fight for the little man???   Nobody...  Only slimy lawyers with their greedy hands out who don't have a chance to beat the stacked corrupt system anyway.
One of the reasons I went back to submitting manually was because of the total unreliability of their system, which would also refuse to accept legitimate receipts in our possession.  When I handed them in manually, I never had a single problem.  I am already so upset, and I haven't even begun to try again online, which is so unwieldy on purpose and totally in Spanish of course.
The only thing I can say about these Government hacks is that they sure are the most underhanded SOB's on earth.
Please buy my house,.... I need to get out of here before I explode at one of these idiots and end up in jail.  A Humanitarian award won't help me then.

That was the day’s excitement.
Al
******
© All my work is COPYRIGHT protected and may not be used in any way without purchase, or without my permission.
If you want to borrow a picture to share with family and friends, Facebook or whatever, at least PLEASE give me credit for the photo.
NOTE that you may click on any photo for an ENLARGED VIEW.
Posted by Souvenir Photo Studio by Al Bourassa at 8:50 PM

Fill in your email address to follow this Blog by email